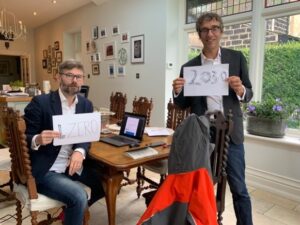 This is the first major update of climate science since the last time the IPCC had its previous full assessment in 2013. The IPCC do not do research but assess a decade of published work by the world’s climate scientists. It’s different than just another report as the Summary for Policy Makers is agreed line for line by governments so they have buy in and the report will directly feed into the COP26 negotiations. I am just beginning to recover from this two week approval process, the first time it has been tried online. Negotiating with governments at 5.00 am from my kitchen was a little surreal.

Unsurprisingly the report brings bad news, but also very important nuggets of good news that show there is still time if we act now.

Bad news:
1. The world is now warmer than it has been in at least 125,000 years and is warming at an unprecedented rate.
2. The weather extremes we are seeing now (fires, floods, heatwaves) are getting worse and new science detailed in the report directly links their increase to our emissions of greenhouse gases.
3. The world will warm until at least the middle of the century whatever path we take: making these extremes worse and some effects, for example permafrost thawing and sea-level rise, are set to continue for many centuries.

But there are nuggets of good news as well:
1. The report has been able to bring multiple lines of evidence (new observations, theory, new sets of simulations, study of past climates) together to make far more robust and constrained climate projections.
2. It shows that if we reduce emissions rapidly in next 10 years and get to net zero CO2 globally around 2050, we still have a good chance of limiting warming to 1.5C.
3. If we go further and get to net zero greenhouse gas emissions, the temperature change should even start to slowly go into reverse.

But what does the report say about trees? At first it doesn’t look like much, but in fact the role of forests and how it may alter under a changing climate underpins some of the report’s main new findings.

Forests are trying their best to help limit temperature rise but high emission pathways pose threats to forests – and although small there is a risk of forest dieback in some regions this century. One of the key figures in the government’s summary (below) shows how the natural system helps to remove a good fraction of our emissions each year, especially if we can get onto a low emissions pathway. But if emissions rise it won’t be able to keep up, potentially leading to an accelerated warming. 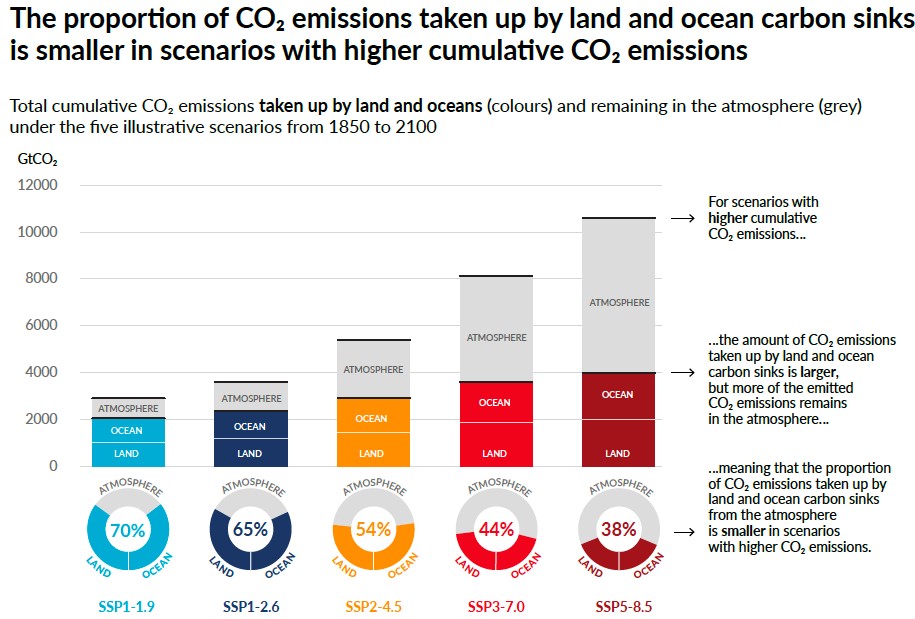 Related to this there could be worrying trends in droughts and soil moisture, especially over the Amazon and at high warming levels. This could potentially lead to swathes of forest dying, something we need to avoid at all costs. Arctic wild fires also remain a poorly quantified threat and are not well modelled.

Just how balanced the future forest sink is, is illustrated clearly by the image below from the Technical Summary of the report. Elevated levels of CO2 will help forests grow (image on the left), but climate warming poses a threat (image on the right). In this diagram, the result of computer model studies, Arctic forests do better with warming, but if extremes of heat cause too many Arctic fires this balance could change. Likewise the response of tropical forests is finely balanced.

Getting to net zero CO2 will very likely prevent further warming. A net zero emission policy has now been adopted by the UK and world’s governments but there was the threat that net zero CO2 might not go far enough to limit warming as continued thawing from permafrost and wild fires would leak CO2 to the atmosphere for many centuries. Detailed simulations examined in the report show that we can expect nature to be kind to us and that this extra carbon will be sucked up by the land and ocean: forests, especially those swathes of forests across Russia and North America/Canada will grow more vigorously absorbing extra CO2 from the atmosphere.

The report also assesses new findings showing that carbon dioxide removal – tree planting or forest restoration being one of the main methods – will actually work in a physical climate sense i.e., it approximately acts like an emission in reverse to lower atmospheric concentration levels. Its efficiency could well change though according to how much we are going to do, so the focus still needs to be on reducing emissions to as close to zero as possible. However, this gives us hope that increasing our tree cover will help suck up some of the remainder.

Net zero targets and the role of nature based solutions will be one of the main themes at the COP26 climate summit. The latest IPCC report confirms that early action to limit emissions will play a key role in ensuring that net zero targets work. We further need to acknowledge that this is in large part thanks to our trees: we need to look after them more than ever.

Close Menu
We use cookies on our website to give you the most relevant experience by remembering your preferences and repeat visits. By clicking “Accept”, you consent to the use of ALL the cookies.
Cookie settingsACCEPT Read More
Manage consent

This website uses cookies to improve your experience while you navigate through the website. Out of these, the cookies that are categorized as necessary are stored on your browser as they are essential for the working of basic functionalities of the website. We also use third-party cookies that help us analyze and understand how you use this website. These cookies will be stored in your browser only with your consent. You also have the option to opt-out of these cookies. But opting out of some of these cookies may affect your browsing experience.
Necessary Always Enabled
Necessary cookies are absolutely essential for the website to function properly. These cookies ensure basic functionalities and security features of the website, anonymously.
Functional
Functional cookies help to perform certain functionalities like sharing the content of the website on social media platforms, collect feedbacks, and other third-party features.
Performance
Performance cookies are used to understand and analyze the key performance indexes of the website which helps in delivering a better user experience for the visitors.
Analytics
Analytical cookies are used to understand how visitors interact with the website. These cookies help provide information on metrics the number of visitors, bounce rate, traffic source, etc.
Advertisement
Advertisement cookies are used to provide visitors with relevant ads and marketing campaigns. These cookies track visitors across websites and collect information to provide customized ads.
Others
Other uncategorized cookies are those that are being analyzed and have not been classified into a category as yet.
SAVE & ACCEPT